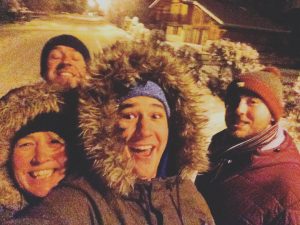 New to the game I have only dabbled briefly with scriptwriting in the past when adapted the first few chapters of my unpublished novel for a university project.

My second project in this genre of writing was far more adventurous and time-consuming. I had a very clear idea of what I wanted to do. An idea that had been burning in the back of my mind since I left France that I was desperate to sit down and tackle. The material I had collected over ten years could easily have been re-told in a nonfiction or fiction form, but deep down I knew the best medium to use would be visual. I couldn’t see the plot structure as a short or feature film and felt the content would work best on TV as a sitcom or series.

I couldn’t see the plot structure as a documentary, short or feature film and I felt due to the comedic tone of the content the material would work best on TV as a sitcom or series.

Of course had my reservations about exploiting the essence of our everyday family life, niggling little doubts that every writer gets. These weren’t just about privacy. I questioned whether I could I translate our real-life events into a captivating script. I also knew nothing of the bigger picture: the production process; timescales; budgets; how to pitch an idea or who to approach, so I had a lot of learning to do!

My task was set, but first I needed to determine whether there was a place in the market for my idea. Then whether I have enough material, if I could I write it and if could I sell it? Oh, and what was I going to call it?

This is my journey behind creating Seasons…

Next Hospital Hill – compilation and creation