A different way of seeing 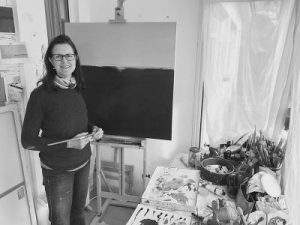 A different way of seeing

In art history, minimalism is a new movement of the post-war period that has its roots firmly bedded in cubism, abstract, non-figurative and non-representational art. It has many levels, from a recognisable sense of a form to a mere glimpse of its essence. In painting, the move from visual recognition towards literal interpretation found favour with sculptors and creators.

It’s no surprise that as a student in Houston, Texas in 1997 when studying Fine Art at The Glassell School of Arts that Nicola Mosley – our next artist to exhibit at the gallery – was influenced by the movement when finding her visual voice.

Her move to Cornwall in 2014 reconnected Nicola with the sea. A significant influence in her life, it now dominates the subject matter of her work. It is the exceptional quality of the light that draws Nicola to the sea as a source of inspiration. And she’s not alone, the atmosphere and elemental weather of the beautifully wild Cornish coastline have captivated many artists in the past. However, Nicola uniquely transforms what she sees. She likes the ambiguity of spaces, and how they can be defined by just subtle detail or a gesture of the paint. This ‘way of seeing’ drives her to reduce a seascape into subtle, minimal forms that hint at the essence of land and sea in subtle minimal ways. By building multiple layers of oil glaze, she achieves a depth of light and colour to her paintings. She then adds texture and definition to her canvas or board with a palette knife. Nicola is part of a small but talented niche of painters who can transform the bare essence of a landscape into eye-catching, sophisticated pieces of work.

Nicola Mosley’s exhibition opened with a private view on the 6th August and runs until the 6th September, Thurs-Sun every 12-6 at the Terrace Gallery, Penryn.

Previous A little help to make our business succeed…