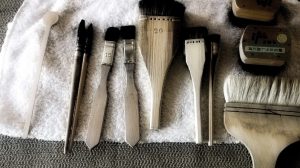 One of the many things we love about art is the variety of techniques and materials available to metamorphosize inspiration into creation. And it always fascinates us how people find a technique or medium which suits them. The work in our latest exhibition has its roots in an ancient process but with a twentieth-century twist, which we knew very little about until we met Adrian Holmes in his Krowji  Studio.

Adrian has perfected the art of Japanese woodblock printmaking and has been inspired by Sosaku Hanga printmaking movement to express his creativity. His passion has arisen from his time in Japan, where he first studied the techniques of the craft. But it hasn’t ended there. Whenever possible, Adrian still pushes the boundaries of the method through his continued studies which explore the flexibility of the media and extend his practice.

The Eastern Asian form of woodblock printing he employs is a versatile process which can be used to recreate patterns, text and images. The process usually starts with a design on paper which is transferred onto a prepared smooth wood block. Cherry and Pear were the favoured hardwoods of the past, as they allow fine lines when carved, and retain the detail of the design even after multiple prints have been made. As time has evolved, so have the materials that are used. Maple, magnolia, birch, beech and walnut are now popular sources although quite expensive. Cheaper, more accessible alternatives like plywood and pine are now widely used. However, they don’t offer the printmaker the same opportunity for fine detail, longevity or grain pattern as the hardwood alternatives.

With its roots so firmly based in such a sophisticated, honourable culture, it is little surprise that there is not only specialist woods to use, but also paper and tools. Once the surface has been carved into a raised relief with sharp steel blades, it is inked with traditional long-handled brushes – made from stiff hog hair tied into a bamboo handle. Tradition dictates that these are brushed over wood with circular movements from an upright position. Then a sheet of paper is laid across the woodblock.

Traditional Japanese papers (Washi) vary from tissue-thin to special 500gsm depending on the artists choice. All are resilient to the process of dampening before printing and made from natural fibres which help them withstand the rigours of hand printing. In ancient times fibres from the bark from the mulberry tree were used. Nowadays, bamboo, cotton and hemp fibres act as substitutes to reduce costs and make the papers more available. Water-based inks are used in both Chinese and Japanese woodblock printing. In the latter, a rice starch paste (Nori) is also applied on the block to enhance and disperse the colour pigment colour over the dampened paper. Watercolour and gouache are later adaptations to the traditional process. Finally, a flat disc-shaped tool, the Baren, helps transmit the ink to the paper using a zig-zag method, aided by the heel of the hand, over the back of the paper. The making of the Baren is an art form in itself, and Adrian honours the process by creating his own.

All in all, Japanese woodblock printing is a complex process, which requires precision planning not only for the carving of the block but also for multiple colour applications. And we can’t thank Adrian enough for bringing a touch of Japanese tradition to Penryn…

“I’m fascinated by versatility, openness and process of woodblock printing. It’s a medium which has so many possibilities which I continue to explore by balancing the beautiful subtleties and using a traditional approach with a contemporary style to focus on semi-abstract themes of landscapes and place.” Adrian Holmes

Watch a video of Adrian at work

Next A little help to make our business succeed…

Previous Investing in the future…