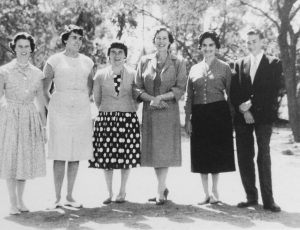 With insight into the colonial hierarchy in Kenya from both the academic volumes and the biographies of Blixen and Erroll I was had many more questions which Molly Maud’s notes did not answer.

Further investigation on the internet lead me to the discovery in the British Library of The founder’s book – A school in Kenya: Hospital Hill 1949-1973 (Joan Karmali). Published in 2002 by Square one Publications it became my second bible and told the tale of John and Joan Karmali. Most importantly it documented the life of the school from creation in 1949 to 1973 when it was taken over by the government. John Karmali (Asian/ Indian) and Joan met in the UK when they trained as pharmacists. Refused entry to both European and Asian schools, because they were mixed race, his children had nowhere to go. A governess was appointed to fill the gap. Shared with other families who were also concerned for their children’s educational welfare, the Karmali children started scholarly sessions in a dining room. A string of minor problems with increasing numbers and the location brought John Karmali in contact with the mayor of Nairobi. The existence of this little collective was soon on the radar and drew attention from Sir Philip Mitchell (Governor of Kenya) who sympathised with their situation and offered to lend an unofficial hand. Termed as  ‘an experiment in multiracial education,’  the foundation was laid for what became Hospital Hill primary school.

I poured endlessly through Molly Maud’s notes and those of the Karmalis to identify what was truth and what was embellished. I knew Molly Maud had a tendency for bending the facts as she had stated herself in her notes.

“For reasons which will be obvious, names of persons  and the name of the school have been changed in this, otherwise true account of a multiracial school in Kenya East Africa.”

Molly Maud had called the school Hibiscus School, which gave me the run around for a while until author C.S. Nicholls pointed me in the right direction with the true name of the school. Born in 1943, Christine spent much of her childhood in Kenya and now lives in my old stomping ground of Oxford. Ironically she is the former editor of the Dictionary of National Biography and has penned many works herself including Elspeth Huxley, A Biography (Harper Collins, 2002), Red Strangers: the White Tribes of Kenya (2005 Timewell Press) as well as a self-published autobiography, A Kenya Childhood (2011).

Christine also put me on to the trail of the Karmalis and their daughter who also lives in Oxfordshire, ironically only five miles from where I used to live. Unfortunately, I have not made contact with her despite my many efforts. Shereen Karmali was born in 1951 so would have been seven when Molly Maud took on the headship of the school and just about to attend secondary school when she left.  She is a shining example of Molly Maud’s contribution to education and has co-edited academic reference books including, Grace, Tenacity and Eloquence: The Struggle for Women’s Right in Africa.

During my web search for material relating to the school, I was also lucky enough to make contact with a number of former pupils who had been taught my Molly Maud during her period as Headmistress. Most of these contacts have themselves provided invaluable information by email, which will eventually feed into the final book.

As I worked through Molly Maud’s her notes my research concentrated on areas of interest, including the mau-mau uprising and the need for change in Kenya; the use of a non-segregated YMCA pool which draws parallels to the segregation in the USA; the Kennedy airlifts, of which President Obama’s father was one. Gloria Hagberg, a teacher at Hospital Hill employed the US President’s grandfather Hussein Obama, a cook at their home.

One meeting Molly Maud mentions in her book which has frustratingly eluded me so far is a meeting with journalist Godfrey Winn from the Daily Express in 1961. Godfrey Winn was an English columnist, a writer and an actor. He wrote novels including biographies and later autobiographies. He worked for the Daily Mirror and the Sunday Express writing a column called Dear Abby. However, he also wrote magazine articles, appeared in films, on TV and radio. Through his autobiographies his autobiographies Infirm Glory (Volume 1), The Positive Hour (Volume 2), I have placed him in Kenya reporting on the end of the Mau Mau uprising and the country’s surge towards independence. However, despite searching the Express archives the article remains undiscovered as does the proof of their liaison.

Her time at the school runs in parallel with the political change in the country and colonial instability brought about following the mau-mau uprising. The gap in the educational structure brought about by this political unrest had undoubtedly allowed the educational experiment at Hospital Hill to evolve and eventually lead the way in education reform when the colonial Kenya collapsed into an independent nation. As Kenya began to change, Molly Maud’s circumstances changed with it, unfortunately not in her favour.

Next Hospital Hill – visibility in the market