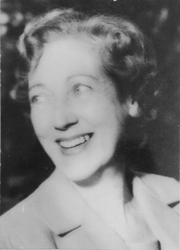 There has always been a certain mystery within my husband’s family surrounding his grandmother who was absent for most of both his own and his father’s life. Little is known of her life and only hearsay exists of her birth, upbringing, and migration to Africa. Much of the true details died with her. All except a few photos and twenty pages of notes from her time as a headmistress of a multi-racial school in Kenya in the late 1950’s.

Twenty-one years later I had the opportunity to read a softback A4 journal containing these notes, which my sister-in-law had collated following my father in law’s death. There were few clues to Molly Maud’s personal life amongst the pages, which gave a compelling insight into her professional life. This journey was the starting point of my journey into her past, colonialism and Kenya’s independence.

From familial Chinese whispers and a few black and white photos, I knew that Molly Maud Holmes (Pentin/Angus) was an elegant lady, a teacher, a box office clerk and an unconventional mother. Her upbringing was rumoured to be far from normal, so it wasn’t a surprise to discover that she had repeated her own family history.

I expected Molly Maud’s journal to contain personal ramblings about her life, her husbands, her children, and her regrets. However, as I began to read I soon discovered that the twenty pages of neatly typed notes withheld any detail of her own family. Instead, they shone with professional pride. They highlighted her struggle as a headmistress to create a level playing field which would give the mixed race children under her tutorage a chance to redress the short-sightedness of the colonial education system.

Through Molly Maud’s journal, I have unearthed histories of brave, forward thinking educationalists who personally experienced prejudice because of the colour of their children’s skin. They too were eager to prove that children should not be restricted from education and with Molly Maud’s involvement, the pilot scheme they help launch shaped the Kenyan educational policy for decades following the country’s independence. This multi-racial experiment was expected to fail by the colonial government but succeeded due to the unrelenting dedication of the founders, teachers and students.

Molly Maud’s drive, dedication, and self-sacrifice contributed to the success of the school, which has paved the way for academic excellence in Nairobi for the last sixty years. Her trail of achievement is one her family can indeed be proud of.