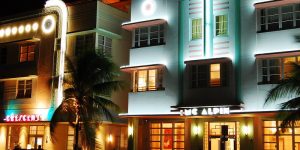 The January flight sales are on, and now is the perfect time to create the ultimate holiday combo of cheap flights and great exchange rates.

The recent election strengthed the pound against most currencies last month. And although the peak rates have now softened, the sterling exchange rate is still better than it has been for a while. This is great news for holiday bargain hunters, as some of the most popular currencies can still be bought at a good rate of exchange. But where are the best deals?

If you fancy swapping the dreary English winter average temperatures of 23 degrees and some culture then heading down to the sunshine state could be the ideal getaway. The Art Deco style of Miami Beach comes alive for three days during an annual festival which celebrates Miami’s unique architecture, design, history and relaxed living culture in mid-January. With lots of vintage art, retro fashion shows, and live jazz between the 6th-13th Jan, Ocean Drive becomes an unmissable hub of cultural entertainment.

At a comfortable 21 degrees in February and only 1hr 20 longer flight time, Los Angeles is worth considering especially with the excellent sterling exchange rate against the US Dollar. The Chinese new year is huge in LA and Chinatown hosts the biggest and best Golden Dragon Parade. With over a hundred years of tradition, thousands of line the streets to watch the colourful parade which features dozens of floats, marching bands, firecrackers and paper lanterns. Food is a massive part of the celebrations, so a visit at the beginning of February is the perfect chance to sample some of the city’s best noodle dishes and dim sums. London to Los Angeles in February £268 with Lufthansa or if you prefer a bit more comfort and service BA are offering great deals for just £10 more.

Oh, Mexico, it sounds so sweet with the sun sinking low

Staying on the western side of the pond San José del Cabo, a charming destination on the southern tip of Mexico’s Baja California peninsula offers a timeless, elegant colonial vibe for a holiday. Renowned for its sandy beaches which are perfect for snorkelling, the two local beaches are safe for swimmers. And nature lovers can spend hours kayaking in the estuarine paradise that brims with graceful hummingbirds, ibis and herons. Thirty kilometres south the spectacular El Arco rock is a mecca to watch sea lions and a perfect romantic spot to watch the sun sink low with a loved one.

Once again stable compared to last years figures the Mexican Peso still provides visitors with value for money. An average meal will cost just £10 and a three-course dinner for two, only £25 at today’s rate of exchange. And who doesn’t like Mexican food? A direct twelve-hour flight to San Jose Cabo for juts £329 with TUI in January and early February.

One night in Bangkok and the world’s your oyster

The Thai Bat has slipped slightly from its peak during mid-December, making the current exchange rate as favourable as the weather. February marks the middle of the dry season with the lowest average rainfall rate of the year. And at an enjoyable 26-30 degrees, this time of year is an excellent time to visit anywhere in Thailand.

If you like flowers and the Thai culture you will fall in love with the Chiang Mai Flower Festival. Running from the 7-9th February in the Mueang District the festival showcases the seasonal orchids, exotic flowers and plants with enormous floral displays, contests, and a parade around the city which is accompanied by dancers in traditional costumes.

Further south towards Phuket and Krabi crystal clear waters and stunning beaches await anyone eager to unwind in paradise. Krabi is the perfect start point for an island-hopping adventure to the chilled atmosphere of Koh Lanta, the underdeveloped tranquillity of while Koh Phayam or the tropical party vibe of Koh Phi Phi. Flights start from just £379 from London to Bangkok with China Southern, with Qatar Airways offering flights at a reasonable £100 more.

Turkish delight on a moonlit night

Closer to home and not as hot as the other destinations I have mentioned. Culturally Turkey has a lot to offer. Perfect for a midweek break, there are acres of classical ruins to explore at Pergamon and Ephesus, palaces to marvel at as you cruise to down the Bosphorus and aromatic Bazaar’s to meander through. With the Turkish lira up to 7.6 as opposed to 6.6 at the same time last year, there is plenty to spend your extra cash on in the maze of sensually pleasing covered streets. Kilim rugs, herbal teas, unique sweets and spices, as well as handmade crafts, are perfect souvenirs for bargain hunters. And with an extra 100 LRA more to spend per £100 than you would have had last year you can treat yourself to a 3-course meal for two in a mid-range restaurant almost for free. Direct flights to Istanbul with Pegasus Airlines are just £82 return or as low as £116 with BA.

Next Romance on a budget