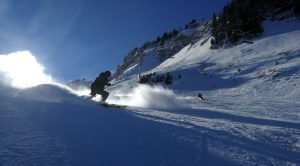 At this time of year, a whole host of dedicated skiers eagerly watch the snowfall stats in anticipation of an early ski trip in Europe. Websites like onthesnow, J2ski and wepowder make it super easy now to track the recent snow levels and escape for a quick pre-Christmas fix. So where are the best early ski destinations in Europe at the moment?

Austria has so far received the best pre-season snow, making it a real contender for an early ski trip. The Tirolian resort of Hochoetz, which claims to be one of the five sunniest ski areas in Austria with an average of 64 sunny days per season, has already witnessed a 60cm snowfall and boasts a 115cm depth on the mountain. Frustratingly closed until the 2nd week in December, other Austrian resorts which have experienced recent snowfalls and are thankfully already open for business. The glacier resorts on the Kaunertaler (240cm), Pitztaler (300cm) and Stubaitaler Glaciers (145cm) have been accessible since September. The ski lifts in Solden are already running. And the popular resorts of Obergurgl-Hochgurgl, Ischgl and St. Anton am Arlberg will welcome skiers back onto their slopes within the coming weeks.

Flights: Innsbruck is the gateway to the Tirolean ski area, including the legendary Mayrhofen and Hintertux Glacier. Easyjet operates direct weekend flights from Gatwick starting Fri 29th November from £130.

The Pyrenees has recently received an early blast from the artic and heavy rains from England which has deposited a fresh 30cm of the white stuff in La Mongie / Barèges, leaving a depth at the top at 150cm. It’s a theme that is set to continue with more snow due in the coming weeks. Unfortunately, La Mongie / Barèges, which would be perfect for an early ski trip. is not scheduled to open until the end of November. However, all is not lost, there are two Pyrenean resorts currently operating. La Molina/​Masella (50cm), which can be reached from Girona or Barcelona, has 4 of the 27 lifts running. And in the small resort of Arcalís- Ordino (45cm) in Andorra, 4 of its 15 lifts are already open.

On the other side of the country Alpe d’Huez, which also opens at the end of November has a 90cm snow level at the top of the mountain. But will be receiving a further natural dusting of snow as the temperatures plummet below freezing. The perfect cold snap opens a weather window for the snow cannons to contribute to the existing levels, which is excellent news for the big resorts in the Tarentaise Valley. Val Thorens (90cm) opens on the 22nd of November. And in the Espace Killy, Tignes (130cm) follows on a week later on the 30th.

Flights: Toulouse flights from London start from £28.00 with Ryanair and Easyjet in Late November. And £32 to Lyon from Luton or Gatwick, with Easyjet. Or £26 from Gatwick to Geneva.

More to come for Italy

During the coming week, Northern Italy is going to be receiving some of the heaviest snowfalls. Stretching from the Aosta Valley to the Piemonte, Lombardia and Liguria regions, some of the resorts will see the arrival of 40-90cm. The deepest falls will centre on Piemonte. Panarotta 2002 (60-90cm), Folgaria (60-75cm), Garéssio 2000, St. Gréé di Viola, Artesina and Prato Nevoso are just a few destined for a major dusting.

Gressoney-Saint-Jean & La-Trinité in the Monterosa Ski resort of the Aosta Valley will benefit from an early 40 -80cm. Due to open on the 22nd Nov Gressonney starts at 1385m in Saint-Jean with a chair-lift serving some beautiful treelined slopes. In the sister resort of La-Trinité further up the valley, more extreme skiing is available, with acres of off-piste opportunities on runs which start at 3,000m. Easily accessed by eight lifts, the La Trinite ski area provides gateways to the pretty Ayas-Valley (Champoluc) and the sheltered Sesia-Valley (Alagna). Skiing starts in La Trinite on the 30th Nov, and by then the sometimes windblown peaks should have a good covering. Perfect for a quick, cheap, early ski trip.

Flights: Weekend flights on the 22nd November to Milan start from £69 with Easyjet from Luton. From £25 from Stansted with Ryanair. Or to Venice from £29 with Ryanair and £45-£55 from Luton or Gatwick.

Next Christmas escapes for singles