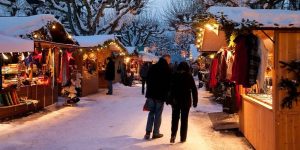 the christmas markets of europe

Brexit threatened to ruin many peoples plans of picking up a few bargains at the European Christmas markets this year. But thankfully, the last-minute change to the timetable has been favourable to travellers and the exchange rate. The value of the pound is holding steady with the UK’s biggest currency suppliers, and the travel plans can remain unaltered, which is excellent news for a last-minute pre-Christmas weekend away.

Christmas markets date back to Germany in the middle ages. They give festive shoppers the chance to buy directly from artisans and meet the makers. It’s a tradition which was given a massive boost last year, thanks to an ecological drive to buy locally. Although somewhat late in arriving to UK town squares, Christmas market concept has caught on quickly. Now a regular event in the larger cities of Scotland (Edinburgh & Glasgow), Wales (Cardiff ) and England (London, Manchester, Leeds & Birmingham), smaller towns and country estates have eagerly adopted the yuletide spirit. York, Bath and Blenheim Palace offer elegant backdrops for the complex projections, spectacular light manifestations and laser shows which accompany their shopping extravaganzas.

The biggest and the best in Europe

Nothing can rival the European Christmas markets of Germany, Switzerland, France, Poland, Italy and Spain. Desirable handcrafted gifts, jewellery, ceramics, and toys vary in varying colours, patterns and designs attract millions of visitors to their cities. As do the grand spectacles performed by the street entertainers and heavenly sounds of the choirs which entertains the crowd.

The highest numbers of visitors every year still swarm to Frankfurt, Stuttgart, and Nuremberg. Pitchers of hoppy beer and buns stuffed with steaming hot bratwurst give a distinct popular flavour to the german street stalls which are part of the appeal. Further to the east, it is the tempting sweetness of warm sugar-coated cake which entices shoppers into the labyrinth of market stalls in Prague every year.

A dusting of the white stuff adds a traditional feel to the Alpine Christmas markets of central Europe. Linning the river banks in the picturesque city of Annecy and Geneva the marché de noel are a mecca for local artisans to sell their handcrafted goods and frequently dusted with snow. Shoppers can browse for hours sampling the tempting flavours of local melted cheese. And keep warm with the cup after cup of fruity mulled wine, made from century-old recipes perfected in the nearby ski resorts.

Strasbourg hosts one of the oldest most extensive and eclectic of the dedicated markets in France. Clustered under the shadow of a Gothic Cathedral the market attracts streams of visitors with its traditional decorations and unique Alsatian delicacies. Spiced bread, traditional pretzels and Tarte Flambée are amongst the sweet treats on offer.

In the southern regions

In the South Tyrol, located near the Austrian border, the markets of Merano, Vipiteno and the Marché Vert Nöel, in Aosta, offer a sprawling mass of stalls selling mugs of hot cider, local food and crafts created onsite by talented craftsmen. Festive music and historical parades entertain the adults, while urban ice rinks provide a sense of fun.

Milan hosts multiple markets in the run-up to Christmas. It offers festive shoppers the chance to buy books, prints, local honey and the essential accompaniment to any Christmas shopping outing – roasted chestnuts.

The Piazza Santa Croce is the setting for the most famous Christmas market in Florence, where vendors from all over Italy come to sell their handcrafted goods and tasty treats. Nougat is one of the most popular gifts to buy amongst the traditional Italian items in the yuletide market of Bologna.

Barcelona hosts one of the best Christmas markets in Spain. Located in the square in front of the Santa Llúcia Cathedral, nativity scene figurines and local sweets are the specialities. Whereas in Madrid, the jewellery, handbags, scarves, ceramics and toys are the more popular festive gifts.