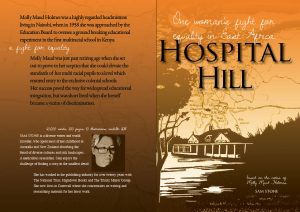 I now had a pile of research work to filter but needed a structure to organise it. I turned to Telling true stories: a nonfiction writers’ guide from the Nieman Foundation at Harvard University (edited by Mark Kramer and Wendy Call) to gain some insight to telling the truth in a nonfiction format.

I had read Hare with amber eyes: A Hidden Inheritance (Edmund de Waal) and Giving up the Ghost: A memoir (by Hilary Mantel) earlier in the year so I returned to Edmund de Waal’s book for inspiration to identify the essence of Molly Maud’s story. Class, justice, desire for success with an inner theme of education and ultimately betrayal were good elements to highlight in the narrative content that would uphold the non-fiction element of Molly Mauds notes but play with the boundaries of truth.

Molly Maud’s notes span six years, five and a half of which had been at the school. They possess a natural beginning middle and end, so the start of each year would dictate the flow of each chapter with the overall structure of recruitment – success – dismissal to set the scene and drive towards the climax at the end of the book. It seemed sensible to follow this annual theme for the underlying structure of the book and interweave her life before and after the school into the narrative as the opportunity arose.

An introduction was necessary to justify my authority and reasons for writing Molly Maud’s story and identification of the look and feel of the book was important for me before I become immersed in creating its content.

After following the visual guidelines set by similar books in the genre the colours and design came together to a satisfactory conclusion when I once again to Out for Africa. The special edition I had found in the library was illustrated with beautiful linocuts by Peter Pendrey these the book cover a sense of place.

I now needed something to place Molly Maud in a scene to start her incredible story and engage the reader. A small detail that I could pull back to in order to show the wider story. I decided to start with the invitation to take on the headship of Hospital Hill. A thick vellum envelope, whose arrival offered her the opportunity to justify her decision to leave England and which would define her in history.

On a quiet sunny day in April Chapter One eventually began to emerge.

Next Hospital Hill – the truth