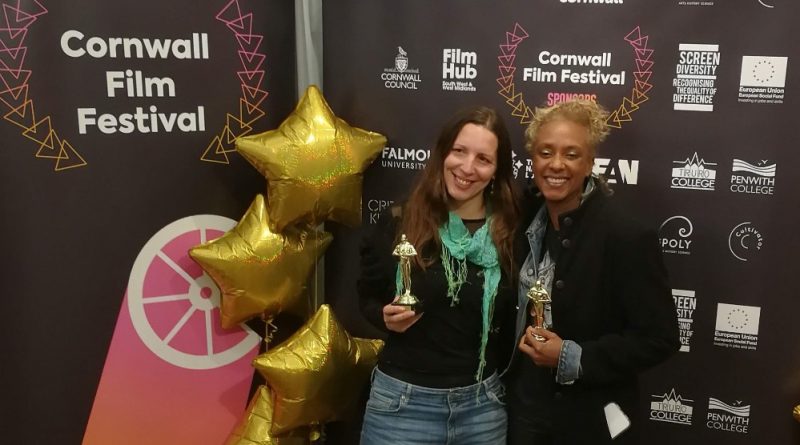 If you are a screen addict like me, a film festival is a perfect place to get a sneaky peek of the latest releases before they hit the mainstream cinemas. It’s also a great place to catch up on all the diverse indy features and shorts that don’t make it as far as your hometown screens.

Some festivals follow film genres other follow themes. The 18th Cornwall Film Festival took place last weekend with the theme ‘Evolve’. It’s not quite in the league of the most prestigious film festivals in the world like Cannes, Berlin, and Venice, but it has a heart of gold and still attracts some great films. It celebrates the undiscovered, the old and the new. This year the festival headliner was Jojo Rabbit a sidesplitting black comedy written, directed and in parts acted by Taika Waititi. Based on Christine Leunens book Caging Skies, the plot revolves around a young boy in Hitler’s youth army who finds out his mother is hiding a Jewish girl in their home.

The Cornwall Film Festival isn’t just about the most popular films. It hosts masterclasses by world-class professionals for anyone starting out in the filmmaking business. And a schools programme which celebrates film and brings visual education to 5-19-year-olds, and their teachers. This year’s film screenings, to help their creative and personal development included Diego Maradona documentary, Revolting Rhymes, Jellyfish and the skateboard film MID90S written and directed by Jonah Hill.

The masterclass highlights for the first day of the festival weekend included a scriptwriting session with Alex Kendall, and talk about Alex’s route into the industry, developing work for shorts, feature, various productions. The second of the day was from BAFTA winner Joan Stribling giving a talk on makeup for the film industry, with a demo and Q&A. Richard Cambridge, co-founder of WeAudition was the third masterclass which highlighted the opportunities that have opened up by digital casting for actors and how filmmakers can extend their reach for projects. And the fourth was a BFI NETWORK, Show and Tell – South West funded films session, with speakers, Sophie Mair, Dan Gitsham, Rebecca Wolff and Yazmin Joy Vigus. The panel-led forum was a group of filmmakers, all of whom had recently received BFI NETWORK funding. The discussion included invaluable information on applying for funding, the pre-production and production process, and distribution plans in relevance to recent case studies of funded work. The BFI networking event which followed, plus bubbly, set the ideal tone to enjoy in the emotive documentary film ‘Cliff Top Session’ produced by the very talented Martha Tilston who closed the evening with a few songs.

The core events for the Cornwall Film Festival span a long weekend. Still, traditionally the most popular days are Saturday and Sunday. It’s also a chance for regular pass holders and drop-in film buffs to sit back and enjoy the cornucopia of Regional and International shorts, classic films (The Blues Brothers and The Breakfast Club), and new releases. Good Posture, the sharp-witted comedy starring Emily Mortimer and talented newcomer Grace Van Patten lightened the mood before the hard-hitting feature System Crasher. The beautifully shot Only You was the Saturday evening gala film which was accompanied by a Q&A with the film’s very talented writer/Director Harry Wootliff. Who also generously gave her time to run an afternoon masterclass.

The final day of the festival featured the compelling documentary-style film Honeyland (Tamara Kotevska). The heart-wrenching story of a deserted Macedonian village, a 50-something woman, and her invasive neighbours who turn her life upside down and threaten her livelihood. The hard-hitting Monos (Alejandro Landes) followed. But Jojo Rabbit brought the cheer back to the auditorium as did the crazy but amusing Australian zombie flick, Little Monsters (Abe Forsythe) which closed the festival.

Next New surroundings for a new year