A journey to freedom of expression in art

It’s International women’s day, so what better excuse to focus on the contribution women have made to the creative arts.

For years women have been represented as a subject rather than the creative force in creative communities. Having the time, money and social freedom are influential factors that are allowing women to have a rewarding career in the arts.

Unfortunately, in most of the museums and galleries around the world, the old masters still dominate the walls of the most famous institutions. A silent statement that reinforces the idea that men are the leaders of the creative arts. But there is hope. As more women take over important curatorial roles in leading art galleries and museums, the imbalance is starting to be addressed, and more solo shows by female artists are now being scheduled into museum timetables.

In Falmouth and Penryn, we are lucky enough to have a legacy of strong women who promoted the arts to make it an acceptable career. The rising middle-class Quaker sisters Anna Maria and Caroline Fox were responsible for creating what came to be known as the Royal Cornwall Polytechnic Society. Now a centre for the arts, the Poly was partially designed to offer educational opportunities and exhibitions of the arts & sciences to the working people of Cornwall. It was a place to meet and share expertise in art practices.

Anna Maria lived unusually for her times. She was an artist and a global traveller. Much like the Bronte sisters, who were also of this age, Anna Maria’s legacy as the founder of the UK’s first adult learning establishment is still noticeable in Falmouth. The art classes she organised at the Poly in 1833 were the educational precursor to the development of Falmouth School of Art.

Under the name Polytechnic Society (RCPS) art classes continued until dedicated private art school premises in Arwenack Avenue were opened n August 1902. On offer in this establishment was the opportunity to take part in Freehand Drawing, Model Drawing, Painting from Still Life, Drawing from the Antique, Drawing of Plant Form, Drawing in Light & Shade, and from memory. It wasn’t cheap at four and ten shillings per session, but it was an opportunity to gain a qualification supported by the Board of Education. Tacita Dean, Jessica Warboys, Kate Holford, Susanna Heron and Judith Kerr are just a few of the inspirational women artists who have benefited from those humble beginners and trained at the Art School, which is now part of Falmouth University.

Although a change in the art world is gaining momentum, a high percentage of galleries represent more men than women. Thankfully our local Terrace Gallery is amongst the five per cent of galleries that have achieved an equal parity of male and female artists. The change is coming…slowly, but it is coming 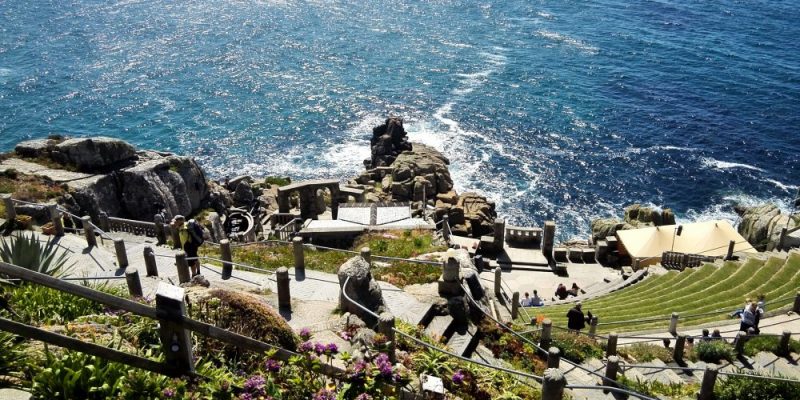 Minack theatre – chance of a lifetime

The beginning of June marked the end of a fantastic course ‘Writing for Stage’ with the amazingly talented Jane Pugh – supported by director and performer John Brolly.

This amazing course hosted by The Writers Block at Cornwall College was aimed at new writers, as well as those who had already written plays. So I was among talented company! Although a screenwriter myself and annual reader for the Nick Darke Award, I have never tackled writing a play. So I was intrigued by the difference between writing for the two disciplines.

The course looked at the creativity and craft of writing for the stage and explored theme, story, characters, dialogue, setting and staging.  Each week was a mini-workshop with a group discussion. And when our plays had been suitably developed we gave each other invaluable feedback before we shared our final pieces at The Minack Theatre.

The event on June 8th was amazing. Despite the lousy weather for a few days before, the day was stunning and offered far-reaching views of the Atlantic ocean. With a cluster of friends and relatives for support, we congregated in one of the practice rooms in the bowels of the theatre, eager to hear each other’s play excerpts.

Jane had guided us perfectly to realising our potential and developing a collection of diverse stories. All the plays were very different with amazing characters and flowing believable dialogue. And we were all very grateful for her dedicated input and enthusiasm throughout the eight weeks.

Please click on the MP4 below if you would like to watch the read-through of my play ‘Dealing with it’. 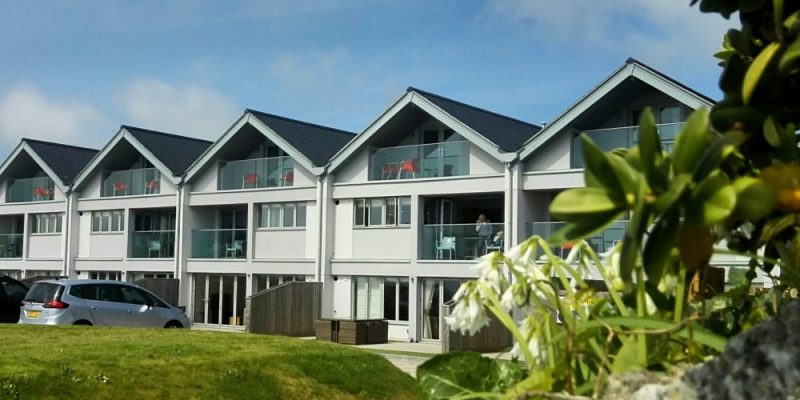 Who wouldn’t want to soak up the sun and rhythmic crash of the pounding surf over breakfast? For a minority of the UK’s population, it’s a reality, but for the rest of us, it’s just a dream. So when a couple of my closest female friends came to stay, I decided to treat them to a well-earned slice of luxury.

As a year-round visitor to Castle Beach, I had watched the construction of The Falmouth Hotel Suites with envy. To me, they offer the perfect holiday solution – stunning views, full self-catering facilities, privacy to lounge about in your pyjamas, and the bonus of a first-class restaurant & spa just a few yards walk away.

Our first essential stop of the weekend was the squishy sofas by the panoramic windows in the hotel bar. As my friends eased into the coastal lifestyle with a large glass of Tarquins, I glowed with pride as they lost themselves as I often do in the ever-changing sea views.

When we eventually left the comfort of the lounge to explore the lodge that was to be our home for the weekend we were pleasantly surprised. The furnishings were entirely contemporary which gave the living spaces an airy seaside feel without being kitsch. The double rooms were thoughtfully situated at the back of the apartment to avoid the first of the of the suns rays and the inevitable dawn chorus from the gulls. And the terrace was ideal for soaking up the last sunny rays of the day with a glass or two of Curio before heading out to dinner in one of my favourite bars to catch up on each others news over dinner. All in all, it was an idyllic start to a fantastic weekend. 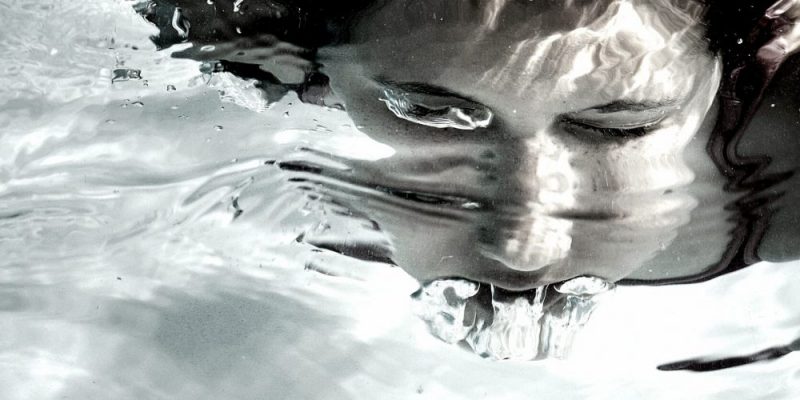 At nearly 6ft I’ve never been a girly girl. So booking myself into my favourite local spa for a lash lift and tint was an adventure into new territory for me.

I do love a good spa session,  and I have been to many all over the world. But in the past, I’ve always opted for more practical treatments. Massage, detox scrub and even the odd pedicure or two. Venturing into the world of beauty therapy was just something that had never crossed my mind. So why now?

Well, there is a practical reason for my strange behaviour – winter is here! Which for me means no more outdoor swimming. However, for sanity’s sake I still need my watery escape, so I’ve been forced inside by the rubbish winter weather.

I’m not the only one who swaps brine for chlorine during the long Cornish winter months. As soon it feels like they are pushing the limits of masochism, many of my fellow wild swimmers also retreat to the nearest pool to satisfy their aquatic addiction.

The pleasure of diving into crystal clear waters and defying the effects of gravity are proven to be both physically and mentally therapeutic. Personally, my enjoyment comes from letting my thoughts wander as I push myself to the limits through still waters. And more often than not I surprise myself with some very creative problem-solving.

Anyway, to cut what has now become a long story about mindfulness short. The leisure suite where I swim also has a spa.  And December’s bargain-priced promo was a Lash lift and tint, which was just too tempting to miss. As much as I love swimming, most waterproof mascaras don’t live up to their hype, and I often come out of the pool looking like Alice Cooper. So my creative problem solving came into its own and today’s little lash lift experiment will hopefully banish my scary post swim appearance for once and all –  well for the next three months anyway. 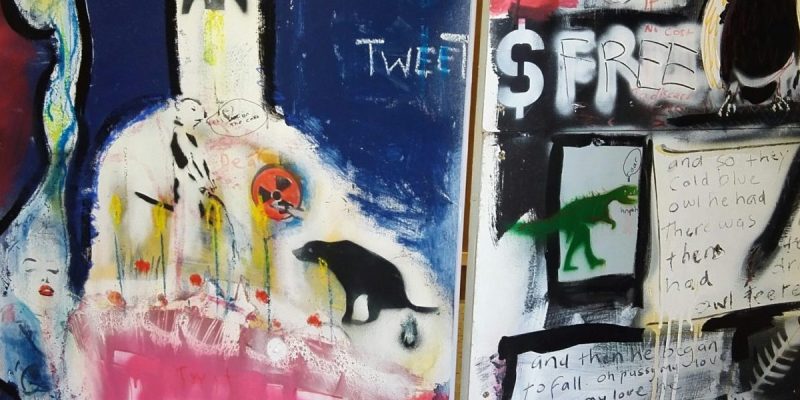 Like buses, private views seem to come all at the same time in Cornwall, so, unfortunately, I missed the opening night of the Cypher Exhibition. However, undeterred by yet another dull Sunday we ambled over to Mounts Bay to be greeted by some rare winter sunshine and bold colourful works of art.

Assembled from the work of the 2017 students on the year-long Professional Practice Course at the Newlyn School of Art, the ground floor exhibition at the Tremenheere Gallery showcases their finished artworks. Some take the form of installation art, others are drawings, paintings, photography and collaborative works.  However, the real treat can be found upstairs, where you are invited to flick through piles of sketchbooks and portfolios to admire all the contributory study which has produced such a variety of work.

An average of fifteen participants joins the Professional Practice mentoring course which runs twice a year. The unique programme aims to encourage artists to achieve a stronger sense of their own artistic voice and energise their artistic practice.

Tutored by some renowned artists within  Newlyn School of Art, students rub shoulders with professional artists who share their working practices and passion for art. Course Leaders Jesse Leroy Smith and Gareth Edwards, are amongst the staff who provide a high level of tutoring time to the students, which is reflected in their body of work.

The exhibition on runs until the 4th Feb, so catch it while you can if you are anywhere near the Penzance area. 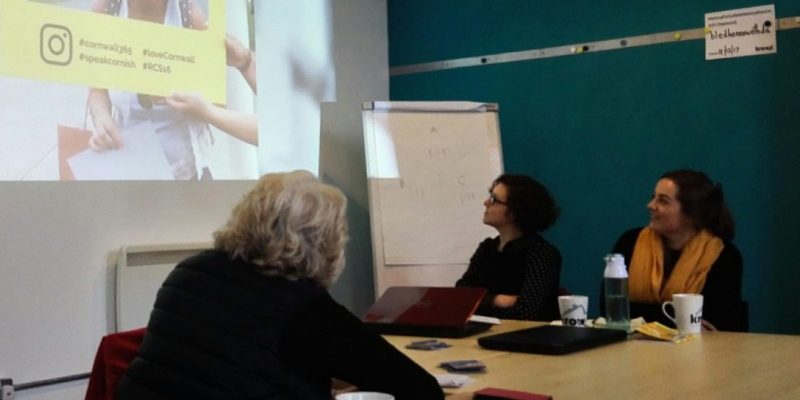 Kernewek for businesses – why it makes sense

I attended this skills day out of curiosity, with an ambition to incorporate Kernewek, the Cornish language, into my work as a writer.

Heavily biased towards promoting the use of this unique language through marketing of existing products and businesses, the session was informative and engaging.

St Austell Brewery, represented by Chris Knight, was the perfect case study to highlight how this Southwestern Brittonic Celtic language can be put to good use. A prime example is one of the breweries best-selling beers Korev, which means ‘Beer’ in Cornish.

Our professional guide for the morning was Mark Trevethan, the Cornish Language Lead at Cornwall Council, who further enlightened us to the possibilities of using Kernewek. He showcased innovative uses of the language from road signs to prime time TV advertising.

Closer to home, Mark opened the door to integration by gently guiding us towards the various resources on offer. More importantly, he highlighted that incorporation of the Cornish language into the marketing strategy of Cornish businesses, will also hopefully benefit the wider Cornish Language agenda.

This well-organised event was delivered by Cornwall 365 at the well known creative hub, Krowji, in partnership with Cultivator and supported by the European Social Fund, Arts Council England and Cornwall Council.